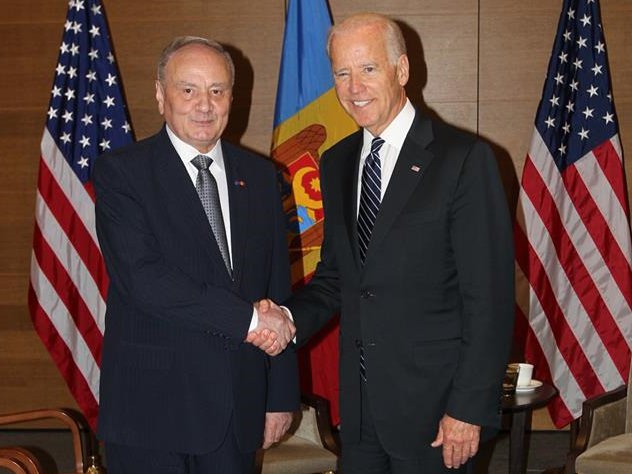 The sides exchanged views on the regional situation, including in Moldova, and addressed the joint projects on the bilateral agenda.

Timofti thanked Biden for the USA’s constant and consistent support provided to Moldova. Timofti said that the support for democracy and infrastructure projects financed by the USA were extremely appreciated in Moldova.

As regards the European integration, Timofti underlined that Moldova continued to be firmly committed in this process and was to sign the Association Agreement, including the Free Trade Area, with the European Union by late June. Timofti said that the Moldovan authorities would continue to give priority to justice, fight against corruption sectors and improve the investment and business environments, necessary for keeping the economic growth trends.

Joseph Biden said that the US encouraged Moldova to go on with the European integration policy, which would bring stability in Moldova and create conditions for the economic growth. Biden informed about the supplementing by another 8 million dollars the funds provided by the U.S. to Moldova, meant for mediatising the pro-European cause.

At the same time, Biden said that the Moldovan authorities should undertake concrete actions to consolidate public institutions and, especially, fight against corruption. Biden assured that the United States would provide all necessary assistance to Moldova, in order to record results to these matters.

Biden added that he was confident that the Moldovan citizens would be able to reach the goals they set at present. „You have capable people, who want to work,” Biden said. The official also reminded the talks held with Moldovan young people during his 2011 visit to Moldova.

Timofti appreciated that visit as a memorable one and invited Biden to pay another visit to Moldova.