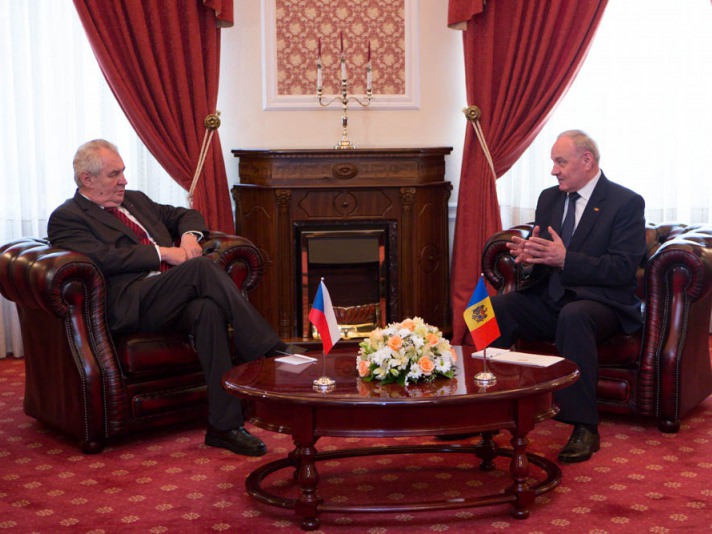 President Nicolae Timofti met his Czech counterpart Miloš Zeman, on an official visit to Moldova, at the state residence today.

The officials had a face-to-face meeting. Afterwards, the presidents attended official talks with the participation of members of the two delegations.

Nicolae Timofti informed Miloš Zeman about Moldova’s European integration process and challenges to the national security in the present difficult regional context. „I am confident that Moldova needs a clear European prospect, in order to continue more constructively the initiated reforms, by defying challenges and regional tensions,” Timofti said.

For his part, Miloš Zeman voiced the Czech Republic’s support for the sovereignty and territorial integrity of Moldova.

Zeman congratulated Timofti on the abolishing of the visa regime for Moldovans by the European institutions and signing of the Association Agreement with the European Union, due on 27 June 2014. „Moldova’s statute of neutrality, stipulated by the Constitution, is not an obstacle to its European integration process,” Zeman said.

Zeman said the Transnistrian conflict could be settled by taking over the German model, namely to delegate extended rights to regions, but without the right to veto.

Timofti declared for the fostering of the bilateral economic cooperation and stressed that the Czech Republic was the European Union greatest importer of Moldovan wines. „I believe that the Moldovan brandy is the best in the world,” Zeman said.

Milos Zeman was glad to find out that a community of 316 people of Czech origin was living in Huluboaia village, southern Cahul district. The official asked the Moldovan authorities to provide those people with the necessary assistance, in order to develop the settlement’s infrastructure.

Touching upon the situation in Ukraine, the two officials voiced support for Ukraine’s sovereignty and territorial integrity and highlighted that the presidential elections, due on 25 May, would contribute to establish peace and political stability.

Following the official talks, an agreement on economic and industrial cooperation was signed between the Moldovan and Czech governments. A memorandum of understanding on the creation of a wine register was also signed between the USAID Agency, Moldovan Agriculture and Food Industry Ministry and Czech Development Agency.