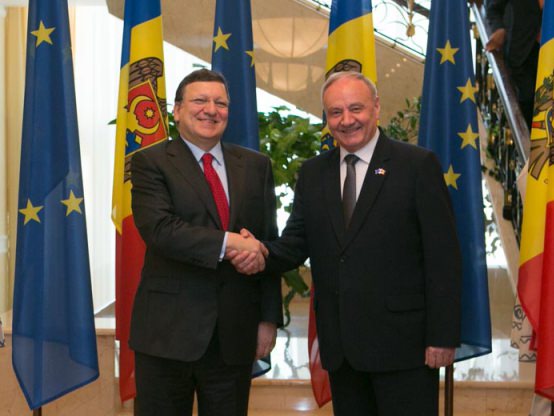 Nicolae Timofti expressed satisfaction with the present state of the relations between Moldova and the European Union, on a rise over the past few years. "Cooperation within the Eastern Partnership has allowed implementing the reforms needed to modernise the country and to open new prospects for the development of my country," said President Nicolae Timofti.

European Commission President Jose Manuel Barroso welcomed the Moldovan authorities’ decision to sign the Association Agreement with the EU on 27 June. "This is an important event both for your country and for the EU. This is a historical choice that will determine the future of the Moldovan citizens. Moldova is a European country and applying the EU values and standards will help strengthen the democratic institutions and improve the living standards of the people, "said Jose Manuel Barroso.

The European official said the cancellation of the visa regime for the Moldovan citizens proved both the recognition of merits of the Chisinau authorities in implementing reforms, and establishing a relation of trust between Moldova and the EU.

Jose Manuel Barroso stressed importance of reforming the judiciary system and strengthening the fight against corruption. "The rule of law will restore public confidence in state institutions," said the official.

President Nicolae Timofti informed Jose Manuel Barroso about the attempts by some forces within the country, guided by external power centres, to block the European integration of Moldova.

European Commission President Jose Manuel Barroso said that to counteract the anti-European propaganda, the Moldovan leaders must organise a broad campaign to inform the citizens about the benefits of the signing of the Association Agreement with the EU.