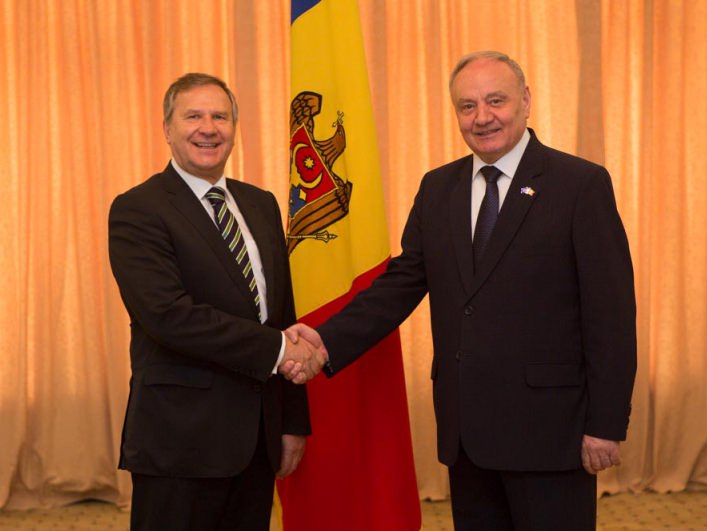 President Nicolae Timofti today met Austrian Ambassador Michael Schwarzinger on the occasion of conclusion of his diplomatic mission in Moldova.

Timofti thanked Schwarzinger for his personal commitment to promoting the good bilateral relations, as well as for the support provided by the Austrian authorities for Moldova’s European integration.

Timofti appreciated the activity of the Austrian Development Agency (ADA), which carried out in Moldova various assistance programmes in modernization of infrastructure, consolidation of democratic institutions and education.

The ambassador welcomed the signing of the Moldova-EU Association Agreement, noting that Austria had opted for abolishing visa regime for Moldovans.

The diplomat reconfirmed the Austrian authorities’ willingness to contribute to holding a new round of negotiations in the five plus two format on the Transnistrian conflict settlement. Schwarzinger said Austria expressed concern about the pressures over Latin script schools from the left bank of the Dniester. He expressed regret that Tiraspol’s authorities had refused to implement the provisions of the Association Agreement with the EU, especially, those related to the Deep and Comprehensive Free Trade Agreement, which would offer only benefits to business people from the region.

The sides exchanged opinions about the complex regional situation.