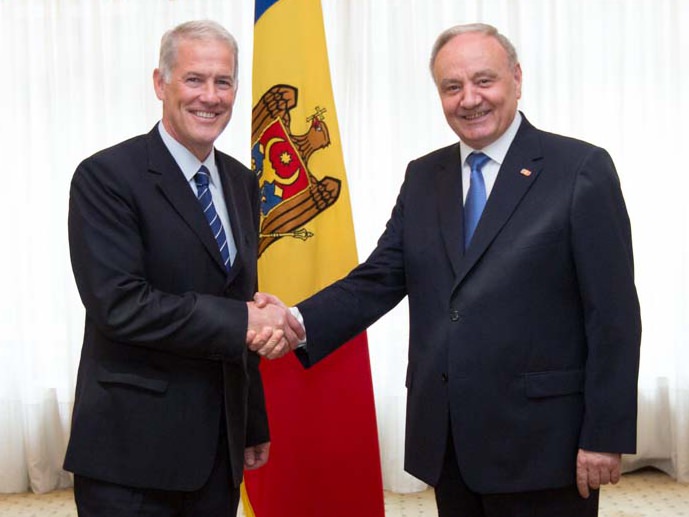 The two officials exchanged opinions on ways of strengthening cooperation ties between Moldova and the OSCE, as well as the situation in the region.

Timofti appreciated the OSCE’s firm position on the Transnistrian conflict settlement by observing the sovereignty and territorial integrity of Moldova.

The president told the ambassador that Moldova’s reintegration was a strategic priority of the Moldovan authorities. “We are open for a reasonable compromise by providing a special status to the region from the left bank of Dniester within Moldova,” Timofti said.

Timofti president pointed out that both residents and economic agents from the Transnistrian region would benefit from the advantages of the signing of the Association Agreement between Moldova and the EU. “We always bring these arguments in the dialogue with the Tiraspol leaders, but the authorities from the Transnistrian region are refractory to any actions of rapprochement between the two banks of the Dniester,” he said.

Nicolae Timofti expressed concern over infringements of human rights in the Transnistrian region, which was out of control of the Moldovan constitutional authorities.

The head of state expressed wish the sides involved in the five-plus-two negotiations should boost efforts to identify sustainable political solutions to settle the Transnistrian conflict.

The president reiterated the Moldovan authorities’ official stance on the need to withdraw the Russian troops and stocks of ammunitions from Moldova, as well as replace the peacekeeping forces in the security zone of the Dniester by a civilian mission with international mandate. “The presence of Russia’s 14th army in Moldova, contrary to the will of the Moldovan constitutional authorities, represents a serious violation of the status of neutrality, stipulated in the country’s Constitution”, Timofti said.

“During my mandate, I will take actions necessary to identify a pragmatic solution to settle Transnistrian conflict, by observing the sovereignty and territorial integrity of the country and providing a special status to the region from the left bank of Dniester. I believe that the policy of small steps will contribute to strengthening the confidence between the two banks of the Dniester”, he said.