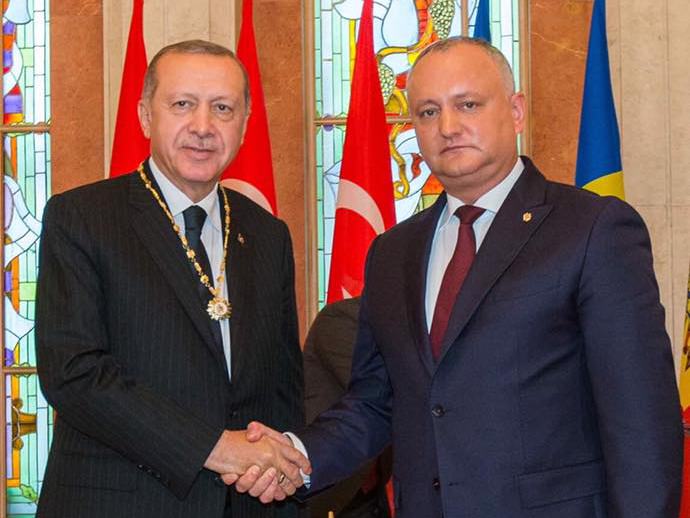 In order to strengthen the Moldovan-Turkish cooperation relations, Igor Dodon and Recep Tayyip Erdoğan signed the Joint Statement on Strategic Cooperation between Moldova and Turkey. “Given the strategic partnership between Turkey and the Republic of Moldova, which has always contributed to the strengthening of the statehood of our country, today we have decided to create the Strategic Cooperation Council,” Igor Dodon said.

Together with his Turkish counterpart, the President of the Republic of Moldova remarked with satisfaction the dynamic development of the bilateral relations between Moldova and Turkey in several areas. "For example, the trade volume in January-August 2018 reached 271 million dollars, which is 7% more than in the same period of the previous year," the head of our state said.

At the same time, the two Presidents have aimed to increase the trade turnover with Turkey to 500 million dollars, and in the next years - to reach one billion. In context, Igor Dodon reiterated that 1300 Turkish companies operated in Moldova, their investment package being about 25 million dollars.

President Igor Dodon mentioned that in the political and diplomatic field our countries worked both on bilateral and international level, demonstrating an increased interest in deepening the dialog. "Mr. Erdoğan's current visit, the first official visit of the Turkish President to Moldova over the last 24 years, can be considered as proof. That's why I consider today's event a historic day for our country", the head of state said.

In this context, the President of Moldova thanked the President of Turkey for the assistance given to the Republic of Moldova and, in particular, to the Gagauz Autonomy in the social, cultural, humanitarian field, etc. Igor Dodon stressed that the people living in Gagauzia played a special role in the Moldovan-Turkish relations and at the same time was one of the pillars of our statehood.

The Moldovan president also mentioned in 26 years of diplomatic relations, Turkey has provided aid to the Republic of Moldova in the amount of 80 million dollars, and this year it amounted to 20 million, including in Gagauzia.

As a sign of high appreciation of the great services to the Republic of Moldova, the President Igor Dodon conferred on Mr. Erdoğan the highest distinction of the state - the Order of the Republic.

At the same time, the head of state together with the high guest unveiled the inaugural plaque for putting the Presidential Administration building into operation and planted two trees in the courtyard of the Presidency.

We remind that the renovation of Presidential edifice was carried out by the request of the President of the Republic of Moldova and implemented by the Government of Turkey through the TIKA Agency.