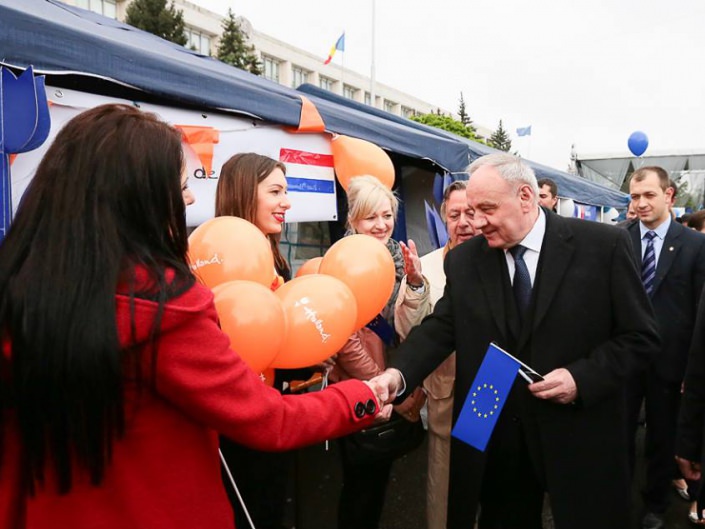 Timofti attended a festive ceremony of hoisting the EU and Moldova Flags in front of the government, as well as official inauguration of the European town in Chisinau.

Timofti delivered the following speech to the participants in the event:

Today, Moldovans mark Europe Day. It is an occasion to reaffirm our attachment to the values that are the cornerstones of the EU – freedom, peace, tolerance and unity in diversity.

After the end of the World War II, the eternal rivals of old times, France and Germany, stepped onto the road to reconciliation. Founding fathers of the EU decided to build together a political construction, meant to ensure peace on the old continent.

Today, the citizens of the 28 EU countries benefit from the privilege of living in a place of safety and prosperity, where human rights and freedoms are observed.

Moldova was committed to the European integration path. Supported by the western partners, we have started a comprehensive process of modernization of society. Reforms give us the chance of a better future.

Some goals were met, although they seemed unachievable five years ago. Fulfillment of commitments taken within the Eastern Partnership allowed us to gain the trust of EU states. Thus, starting from 28 April, visas for Moldovans were abolished. We can travel freely to Europe. Visiting the western countries will change for the better people’s minds.

The Association Agreement with the EU will be signed in the nearest future. Its positive effects will be felt by all citizens.

Those wishing to return to the dark past, see their dreams shattered. That’s because people have realized that our future is in great European family.