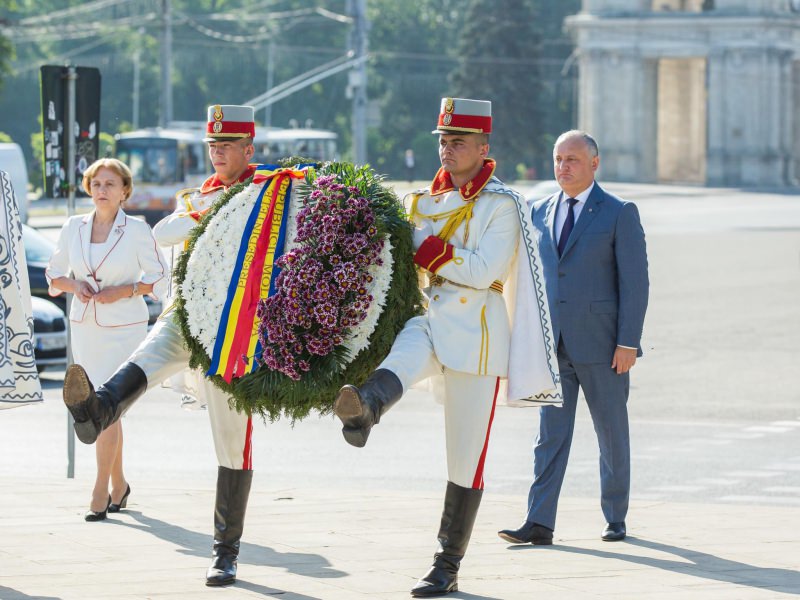 Today President of the state, Igor Dodon, together with the President of the Parliament, Zinaida Grechanii, diplomatic corps accredited in the Republic of Moldova, president’s counselors, deputies, members of the government and representatives of the civil assassination laid flowers at the Stephen the Great Monument on the occasion of celebration of 515 years after the great ruler’s eternity.

Stephen the Great was the Moldavian ruler between years 1457 and 1504 and happened to be one of the most memorable personalities in the entire history of Moldavian country. There was nonesuch diplomat and military ruler, he loved country and was fighting fiercely for its’ statehood. As well he was a great defender and promoter of our culture and religion – orthodox Christianity.

The President distinguished that the Great Ruler is a good example for himself as well as for a huge part of the Moldovan people.

Also the Head of the State brought-up the memory that this year we celebrate 660 years of the foundation of Moldavian State and year 2018, due to Decree of the President of the Republic of Moldova, was declared as the year of the Stephen the Great, the Moldovan Ruler, as the gesture of high gratitude towards Great Ruler’s role in the history of the Moldovan state.

Igor Dodon noted that we have the duty to preciously save heritage which was gifted to us by Stephen the Great and send it to the next generations. “Only by honoring the memory of our great ancestors, we can survive as a country! Moldova has a great past but it also has a dignified future!”, said the President of the State.