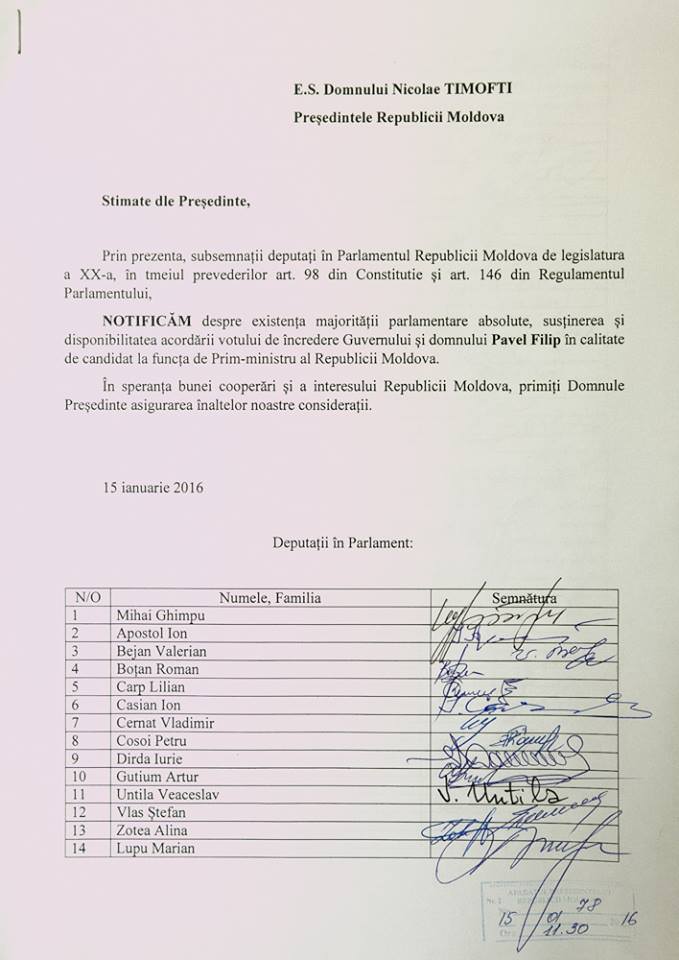 The extremely tense atmosphere from the society and the people's revolt against the latest political decisions, expressed in mass media, including in the street, oblige me to explain the political context in which we are found.

I took the decision to nominate Mr. Pavel Filip as candidate for the office of prime minister as a result of objective elements, which cannot be doubted from the constitutional point of view.

I refer, first of all, to the decision by Mr. Ion Paduraru to give up the mandate of candidate, which I gave him on 14 January 2016. Following this decision, the process of identifying a candidacy for the post of prime minister had to be resumed.

In these conditions, a parliamentary majority made up of 55 MPs proposed me a candidacy, the one of Mr. Pavel Filip, which I was obliged to accept, in accordance with the Decision issued by the Constitutional Court on 29 December 2015, the item No 118 of which stipulates that, I cite, ''there is no constitutional and democratic reason for the president not to nominate a person, who has a parliamentary majority, as candidate for the office of prime minister, may he/she be adverse to the president.''

Beyond my personal opinions, I am obliged, according to the powers I have, in my tenure of president, to observe the country's laws and in this case, the instructions by the Constitutional Court.

I assure you that I share the concern and wish for change, which persists in the society and I believe that the civil society must be listened and taken into consideration when taking political decisions.

Therefore, I appeal to the parliamentary majority and the prime minister-designate to take into account the civil positions from Moldova and the citizens' opinions, in the procedure of compiling the action programme and list of the government, as well as in the one of the cabinet's voting in parliament.

As for the street protests, I instructed that the law-enforcement bodies ensure the security of all citizens, as well as the people's right to hold rallies and to free expression, so that abuses and surpassing of the legal framework be excluded.